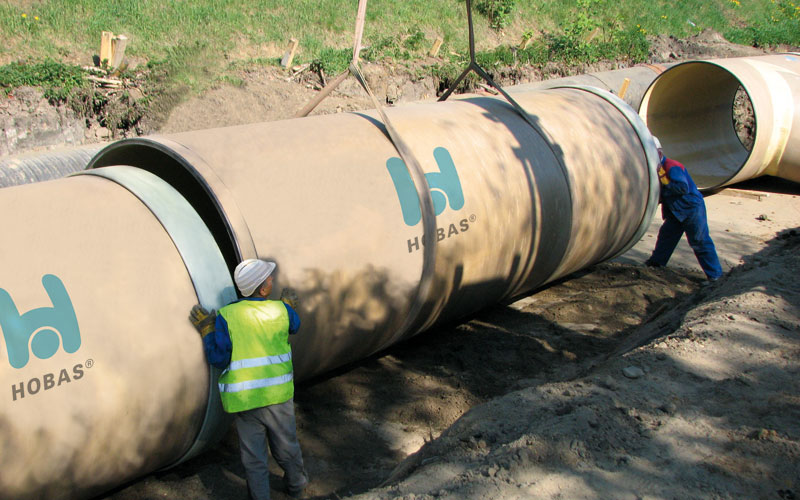 Once upon a time there was a little river that wound its way through the scenic countryside in southern Poland. In the course of time however more and more wastewater was discharged into it until the small river turned into an open sewer, posing a considerable threat to the environment. The Rawa flows through the Silesian cities of Świętochłowice, Chorzów and Kattowice before joining the Brynica River. Only ten percent of its water came from the source, a pond, and 90 percent consisted of storm water and wastewater. It was time to act!

Because of the high level of pollution and resultant unpleasant odor, the Rawa was routed beneath the cities in underground channels in the 1970s and 1980s. Plans were to cover further parts of the Rawa in 2008/2009 and direct the water through a treatment plant downstream from Chorzów. There it was to be treated and then allowed to flow out in the open and above all in a clean state.

Sewer planning
An engineer from Szczecin was given the job of planning the sewer. He suggested a 3.3-km-long sewer main made of rectangular concrete modules, but a planner from Krakow implemented the project with pipes. Of the 3.3 km, 2.7 km is a DN 2400 pipeline with two DN 2400 pipelines running in parallel for another 600 m. In addition, a DN 2000 branch sewer is also planned over a length of about 1 km and two 600-m-long parallel feeders with a diameter of 1,800 mm. The pipes join an existing, already rehabilitated concrete sewer.

Difficult material choice
Selecting the right material for the ambitious project proved to be more difficult than expected. A concrete sewer had originally been planned. This option had to be rejected however because the ground was too soft and the hydraulic properties of concrete pipes also left a lot to be desired. Possible alternatives included HDPE and GRP pipes. HDPE pipes have to be joined by heat fusion on the construction site, which requires a dry place to do so. Nowhere suitable was available and HDPE was therefore out of the running as well.

Hobas wins with unbeatable benefits
Hobas GRP pipes have many advantages. In this project, the following were what ultimately prompted the contractor to opt for Hobas: Hobas pipes do not need to be prepared in any way on site, they are supplied ready for installation. An excavator moved the pipes to the sewer without any difficulty, even in areas that were difficult to access. The push-to-fit couplings premounted at the factory also enabled installation to progress rapidly in winter. In addition, the hydraulic properties of Hobas products are better than those of HDPE pipes and when it comes to temperature resistance Hobas GRP sections beat HDPE by far. As there is not much soil cover over the sewer, the top of the pipes is subject to extreme temperature fluctuations of up to 40 degrees Celsius in the course of the year, while the temperature at the side walls remains relatively stable all year round.

HDPE has a much higher coefficient of thermal expansion than Hobas products and different temperatures round the pipe would have been a problem. Hobas on the other hand won over the contractor with the impressive pipe properties.

Simple installation – satisfied customer
Before installation, the contractor stripped the top meter of soil and replaced it with new material. As a result, the ground contaminated by the polluted water was removed, putting a stop to any health hazards it posed. The Rawa now flows through the Hobas pipes to the treatment plant and the unpleasant odor in the surrounding area is a thing of the past. At the plant, the water is treated before being returned to the natural river bed. The local residents are delighted to have a recreational area with a clean river – the environment and above all downstream waters are no longer polluted.

“The director of Energopol, the contractor, thanked me in person for the first-rate consultancy work and the well thought-out technical project solution,” says Marek Mathea, Hobas sales representative for Silesia, beaming with pride. “Hobas pipes put in a great effort to complete the project within the tight schedule.”

Application
Sewer, canalization of a river 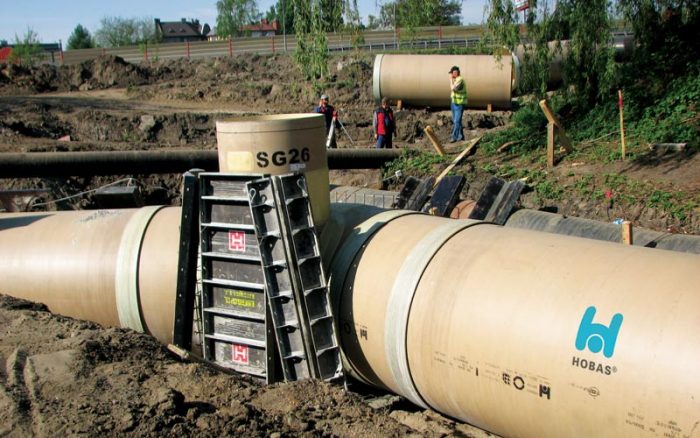 Do you need more help?

Let’s get in touch

This site uses cookies. By continuing to browse the site, you are agreeing to our use of cookies.

We may request cookies to be set on your device. We use cookies to let us know when you visit our websites, how you interact with us, to enrich your user experience, and to customize your relationship with our website.

Click on the different category headings to find out more. You can also change some of your preferences. Note that blocking some types of cookies may impact your experience on our websites and the services we are able to offer.

These cookies are strictly necessary to provide you with services available through our website and to use some of its features.

Because these cookies are strictly necessary to deliver the website, refuseing them will have impact how our site functions. You always can block or delete cookies by changing your browser settings and force blocking all cookies on this website. But this will always prompt you to accept/refuse cookies when revisiting our site.

We fully respect if you want to refuse cookies but to avoid asking you again and again kindly allow us to store a cookie for that. You are free to opt out any time or opt in for other cookies to get a better experience. If you refuse cookies we will remove all set cookies in our domain.

We provide you with a list of stored cookies on your computer in our domain so you can check what we stored. Due to security reasons we are not able to show or modify cookies from other domains. You can check these in your browser security settings.

These cookies collect information that is used either in aggregate form to help us understand how our website is being used or how effective our marketing campaigns are, or to help us customize our website and application for you in order to enhance your experience.

If you do not want that we track your visit to our site you can disable tracking in your browser here:

We also use different external services like Google Webfonts, Google Maps, and external Video providers. Since these providers may collect personal data like your IP address we allow you to block them here. Please be aware that this might heavily reduce the functionality and appearance of our site. Changes will take effect once you reload the page.

Hobas is part of the Amiblu Group. Amiblu has production facilities in Germany, Spain, Poland and Romania, as well as a research center in Norway. Hobas GRP pipe systems are distributed in Europe exclusively by Amiblu.

Get in touch with our team

Do you have any questions? Here's how to contact Hobas by phone or email. We are always happy to help!